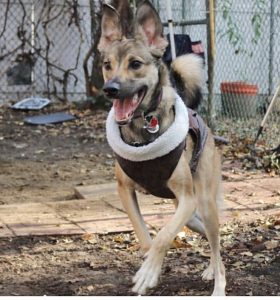 Slade, 2 years old, utd on shots, neutered. Shepherd Greyhound mix. Originally rescued from the meat trade in Azerbaijan, Slade was adopted from a rescue in Brooklyn that has since closed down. He spent a lot of time in crowded shelters with little human interaction making him fearful of people. He has spent the last year in a home learning how to trust people again. He has made an incredible amount of progress. He now vocally demands attention, and stays close, his head won’t leave your lap. He will make sure there is room for him on the couch, and in your bed if you allow him. He needs a lot of love and attention, and loves to lick. Slade is skittish in loud environments, and has trouble going for walks, he would rather hang out in a high fenced backyard out of the bust city. He would do best with an active person who has time and patience to help him continue to recover. Slade knows basic commands, and is crate trained. He can be kept occupied with toys, especially his Kong. He takes time to warm up to new people In his space but when he finally welcomes them, he can’t get enough attention. He enjoys howling with his humans. He will never fail to make you laugh. Slade is highly alert and an excellent guard dog . Slade should probably be the only animal in his household unless adopted by an experienced owner who can properly help him adjust to living with another dog above 18lbs. His anxiety lessons with another dog around, it just has to be the right dog. He loves cats, but should not be left unsupervised with them. He’s an absolute goof ball with more love to give than he knows what to do with. He needs a chance to become the dog that is inside of him. Again he needs to be out of the city in a home with a high fenced in backyard. 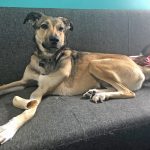