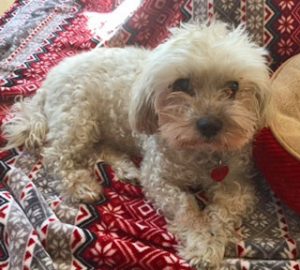 Ricky is a sweet, low maintenance, older Havanese (may be mixed with Lhasa) who needs a loving home. He was rescued last year by Friends of the Homeless Animals after he was found as a stray in New York City, matted and filthy, and mostly deaf. Ricky, who weighs about 17 lbs, was adopted to an elderly couple who adored him, but in recent months Ricky lost sight in one of his eyes and began to get snappy when he was suddenly picked up or leashed when he didn't expect it. Ricky also has a cherry eye but that does not bother him and does not need to be corrected. In his foster home, Ricky has been picture perfect-- when his foster mom wants to put on his leash, she just make sure he isn't surprised. He almost never barks--only chimes in occasionally if his foster brothers and sisters start barking. We are looking for an adult only home for Ricky even though he lives with an eight-year-old child now and is fine with the child. But anything unexpected--someone suddenly picking him up or petting him when he doesn't see you coming--and he may react. Ricky attaches very quickly. He will follow you around and lay at your feet. When his foster mom comes home, he greets her with a wildly wagging tail. Ricky is perfectly house trained and, according to the vet, in good health for his age. Ricky walks well on a leash or else you can just open the door and he will go out and get right down to business. Ricky gets along fine with dogs and cats, and likes being part of the pack--he would love a home where he had some company. Ricky is a very easy dog and is happiest when he's laying at your feet or sleeping in his dog bed or following you around. We just want to make sure that any potential adopter understands that because of his diminished hearing and lack of sight in one eye, Ricky shouldn't be handled a lot and definitely not unexpectedly. Ricky is such a sweet boy and has a happy wag in his tail--his foster mom just loves him. He is waiting for a loving place and warm bed to call his own. 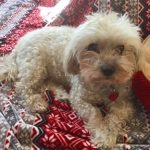 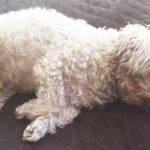