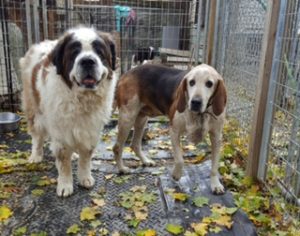 Charlie and his best friend Copper both rescues are now in need of a home in their senior years. Their guardians are ill and moving to Mexico and can’t bring along Charlie and Copper. They unfortunately put them on Craig’s list and decided to euthanize them if they did not find them a home. One of our fellow rescue group, the Animal Support Project (“TASP”) found them on Craig’s list; they called us and we together need to’ find these two a home. Charlie the St Bernard is 9 years 10 months and was rescued 7 years ago where he was in a home with 3 Huskies that would gang up on Charlie and eat all his food. When Charlie was rescued by his current family, he was only 90 lbs and starving…he ate 32 cups of food in the first 24 hours with them. He now weighs 120 lbs. He looks huge because he is a long hair Saint. He is neutered, UTD on all shots and microchipped. He is not aggressive around food or anything. Charlie is a big teddy bear. He loves his walks and hi naps. Charlie is very low key; he loves to hang out and enjoy life; loves children and all human beings…nothing he likes more than being pet, or going for a stroll! Not sure how Charlie is with cats as he has not been around many. He is a true Saint. His best friend is Copper, a Coons Hound. They are devoted companions. They are best friends and there has never been an issue between them. Two years ago, Copper was attacked by a bunch of coyotes and Charlie saved his life. Copper is UTD on shots and he is also neutered and microchipped. He is 11 years old. Copper is the sweetest dog whether with other animals, children or people in general….He used to eat dinner with his neighbors cats. Copper has a fat deposit in his neck which often happens with Coons Hound…the vet said nothing to worry about it. He has had it for the last 3 to 4 years, and it doesn’t bother him. Copper was rescued from Hurricane Katrina when he was about 9 months old…he is scared of loud noises and storms due to his experience with the Hurricane. He came from the Paris parish which was the most under water. He is a survivor and loved hunting in the woods when he was younger. He is very mellow now at 11 years 8 months but still has plenty of energy to go for walks every day, chase a few cars down the road, and play a game with Charlie for his milk bones (they both love playing with milk bones). He is an incredibly smart dog…he still has his young spirit although he is very gentle. If there is a body of water, he will happily go in. If someone is just looking for a companion that is always game to do something, he will not disappoint. Charlie is more laid back; he likes to lumber around and nap and snore. These seniors are bonded and must remain together; they are all they have left. Reality is they are two big old mushy gentlemen who are in need of a home to live out their retirement years. Luckily we found them before they were euthanized- they are very glad TASP and PAWS found them on Craig’s list- we all know the horrors there, especially for big old dogs. They will make great watchdogs, welcoming committee, floor-warmers, ice-breakers and conversation starters. They will help clean the kitchen floors leaving no scraps behind (no onions, please) and watch after the house while you’re away. And they promise they will never ever move away and leave you behind as they know how that feels- 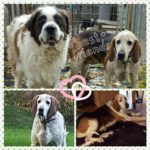 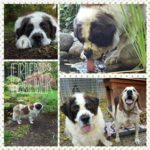