Meet BARLEY>>>>> 4.5 year old Staffie/American Bull dog mix. He weighs 50 lbs, is neutered and utd on his shots. His dad for his whole life was going to euthanize him because Barley did not get along with his new wife or her dog. His dad had nowhere to turn as Barley is not a dog for everyone. He would do best in a home with no children and probably would do best with no other animals. He is dog selective. Although we know he was going to be a difficult placement, we took Barley in as to euthanize him was not an option. He has been with a wonderful behaviorist who has had the opportunity to get to know him and work with him. He is happy and friendly dog but likes his space. He is not aggressive but will let you know when you are in his space. He is 100% housebroken and crate trained, plays well and gives up his toys when asked. He is not dog aggressive; he is more dog neutral. He would prefer not to interact with them. Barley is a great housedog. He has had no issues being left alone and has shown to be reliably housebroken. He is crate trained and loves his crate. He loves hanging out, curling up and napping while you are watching TV; he will play ball or frisbee if invited and plays very politely. He is not at all demanding of your time or attention, rather he politely accepts it when offered. He used to hike and bike with his former guardian and he loves kayaking (had his own lifejacket). He is built for it (on the small side for this type of dog and muscular). He pulls a little on the leash initially, but after 15 feet or so, slows down and walks nicely. He has a happy, goofy side when playing- which is very sweet. He just needs that right person who will understand who he is and what he needs- and he will be the best friend ever. 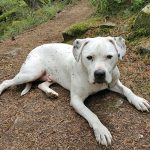